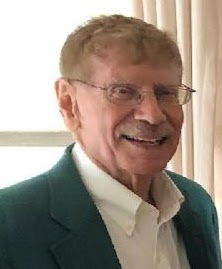 Art was born in Chicago, Illinois and spent most of his childhood in New Haven, Connecticut where both sides of his large extended families resided. He attended James Hillhouse High School in New Haven and graduated from Greenwich High School. He earned a Bachelor of Arts in Psychology at Southern Illinois University and then completed his Master’s in Clinical Psychology at Bradley University in Peoria, Illinois, followed by a one-year internship at a state hospital.

His career included working at psychiatric hospitals and clinics in Wisconsin, Idaho, Louisiana, and Baltimore. One of his many accomplishments was writing a grant for Baltimore County to establish an outpatient clinic on Winters Lane in Catonsville where he worked as a practitioner for 25 years before taking an early retirement in 1992. While Art continued in private practice for another 5 years, he was always eager to dispense advice with his calm demeanor and soothing voice. He espoused Harry Stack Sullivan’s Interpersonal Theory and believed that people’s interactions with other people motivate their behavior and determine their identity. Art made his mark helping, motivating, and coaching people, whether it was in sports or life.

After retirement from his first career, he managed his small farm in Owings Mills where he remained active and busy upkeeping his pastures, sawing down trees on the property, and taking care of his Arabian horses, goats, dogs, and cats.

Inspired by Bernard Baruch, he also was an accomplished businessman, skilled negotiator, and avid investor.

Art had many interests. He was an expert at fixing, painting, and restoring classic sports cars. Throughout the years, he collected numerous cars: his treasured Austin Healeys, Jaguars, Maseratis, BMWs, and his prized 1972 DeTomaso Pantera. In addition to his mechanical prowess, he was the quintessential handyman. He was proficient in carpentry, electrical work, plumbing, furnace work, and everything in between. There was never a challenge he wouldn’t take on.

Additionally, he enjoyed sailing and power boating, antiquing, and serving as the family’s grill master.  He also was a die-hard Terrapins basketball and Ravens fan.

Above all, Art enjoyed spending time with his cherished family.

A private service was held on Friday, October 1st.  In lieu of flowers, contributions in Art’s memory may be made to The Children’s Home.

Make a Donation in Art’s Memory

When you give to The Children’s Home, you help us meet the needs of vulnerable kids from across Maryland by giving them a safe and caring environment. With your help, The Children’s Home can continue to offer high-quality services to the kids who need them most.

Whether it is to support therapeutic services, arts & recreation, life skills, or general support, we will make sure your donation helps the kids in our care to SHINE.

This site uses cookies. By continuing to browse the site, you are agreeing to our use of cookies.

We may request cookies to be set on your device. We use cookies to let us know when you visit our websites, how you interact with us, to enrich your user experience, and to customize your relationship with our website.

Click on the different category headings to find out more. You can also change some of your preferences. Note that blocking some types of cookies may impact your experience on our websites and the services we are able to offer.

These cookies are strictly necessary to provide you with services available through our website and to use some of its features.

Because these cookies are strictly necessary to deliver the website, refuseing them will have impact how our site functions. You always can block or delete cookies by changing your browser settings and force blocking all cookies on this website. But this will always prompt you to accept/refuse cookies when revisiting our site.

We fully respect if you want to refuse cookies but to avoid asking you again and again kindly allow us to store a cookie for that. You are free to opt out any time or opt in for other cookies to get a better experience. If you refuse cookies we will remove all set cookies in our domain.

We provide you with a list of stored cookies on your computer in our domain so you can check what we stored. Due to security reasons we are not able to show or modify cookies from other domains. You can check these in your browser security settings.

We also use different external services like Google Webfonts, Google Maps, and external Video providers. Since these providers may collect personal data like your IP address we allow you to block them here. Please be aware that this might heavily reduce the functionality and appearance of our site. Changes will take effect once you reload the page.